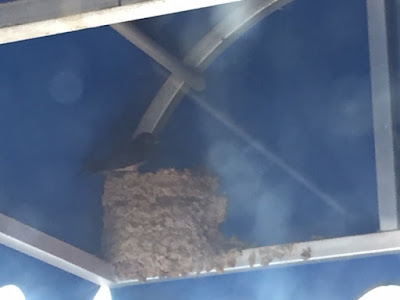 After what seemed to be a never-ending winter, it's finally spring in beautiful Historic Downtown Elkin, NC! Ok, so the first "official" day of Spring was March 20, but for Yadkin Valley Quilts, Spring hasn't come until our barn swallow family, Roscoe and Phoebe, return from their winter wanderings.

When we first took possession of our building in July of 2018, there was a bird's nest in our awning, which was quickly removed. Last Spring, Roscoe and Phoebe returned from down south and proceeded to rebuild their nest in the awning. We delighted in watching them build (rather quickly, I might add!), and later have and raise two sets of baby birds. Our little bird family provided a great deal of entertainment, and we have missed them since they headed south late last summer.

We've been watching for them, and today Tim caught them checking out their spring & summer digs. This is a photo taken just a few minutes ago of Phoebe inspecting her nest to ensure that it is ready to accommodate her babies. Roscoe was nearby, making sure that nothing was going to harm his sweet gal. As I am typing, I can hear them at the door announcing their arrival to the neighborhood.

We will keep you posted with the comings and goings of the YVQ swallows! When you're in the neighborhood, stop in for a visit. We just ask that you look without giving them any cause for alarm.

Why We Do What We Do 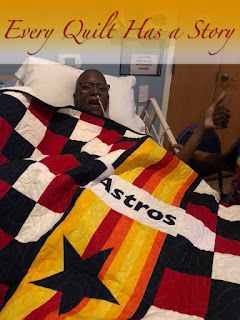 Every Quilt Has a Story. The following is the story of the quilt shown here. (I'm not going to use full names, just initials, out of respect for my friends and the situation. They have given their blessings for me to share the story.) My apologies that it's rather long...you might want to grab a cup of coffee or your favorite cold beverage.

I (Andrae) met my sweet friend, D, during our days at the University of North Texas (Go Mean Green!). He played baseball with a classmate of mine, who introduced us our senior year.

After graduation, D was the only one of my baseball friends that I kept in contact with. It was sporadic over the years and miles apart, but we kept in touch nonetheless. He took a job in another state, but made it a point to come home to the Houston area for the holidays and spend time with his family. On one such visit, he spent some time with me and my young son. As a newly single-again mom, his friendship was a blessing. He was just that — my friend.

You've seen the saying, "In a world where you can be anything, be kind"? That was D. That IS D.

My son and I moved to Utah where I eventually ended up at the second of two state universities that I worked for. My job took me to a conference in Minneapolis, where D just happened to be working at the time.

I'll never forget standing in that exhibit hall and seeing him standing in the entry way, larger than life, his signature smile on his face, my friend, my connection to "home". Big hugs and some conversation later, and he was on his way. My coworkers were a bit surprised at my friend's appearance from who-knows-where (How in the world did this gal know someone way up here?). Hopefully they recognized the unspoken demonstration of friendship that they witnessed.

In the years since, D met and married a beautiful woman from Chicago, K. They have three beautiful athletic boys (ages 7, 10 and 11) who also love baseball, and their daddy. I didn't know until recently that Chicago women and Texas women have a LOT in common — DON'T MESS WITH US! I am SO thankful that D has K in his life!

The morning of Saturday, June 16, 2018 is a morning I'll not soon forget. It was the first day of our first Shop Hop. We'd worked so hard to prepare for it, and were expecting a large number of people in the shop. We had recently implemented a new Point of Sale system, and we were ready to go. Yet I was still anxious.

Tim came upstairs after his shower and found me standing by our bed sobbing. I had picked up my phone and glanced at Facebook. The first post I saw was K's post that D was in the hospital and was being intubated due to difficulties breathing. My friend had been fighting cancer for several years, and this was the first I knew about it. I was heartbroken! God put my anxieties in perspective. He reminded me that the anxiety I was feeling about our day was absolutely nothing compared to what my friend and his family were going through. I was reminded what it feels like to be a wife whose husband's health is in jeopardy. What it is like to helplessly sit by your husband's side while the doctors do all that they can for him. When I apologized to Tim for my tears, his response was that he understood, as the love I have for my friends is as deep as my roots in Texas and North Carolina. My tears were all that, and more. (For those of you who don't know, Tim has had several life-threatening medical issues over the course of the past 5 years.) 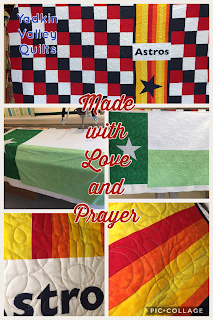 D's quilt started as a tribute to our time together at UNT, with the front to be a lap-size version of the UNT flag (it looks pretty much like the Texas flag, only in greens and white). I had some solid red, white, and blue 5" squares I was going to use for the back. The quilting design HAD to be the "Play Ball" design we have, complete with baseballs, gloves, and the words, "Play Ball". It would be perfect!

And then there's the Astros (as in Houston Astros, World Series Champions). D is a big fan. He wanted to take his boys to an Astros game while he still could. But then his health declined and that dream was shattered.

So, about those Astros....let's see what fabrics we have....can we pull something off? I found a photo of the uniforms the 'Stros wore when we were growing up, and pulled fabrics that would allow me to make a "Tequila Sunrise" panel on the back, and away we went!

The result — the quilt shown in this post (with the UNT flag on the back). To say D loved it seems to be an understatement. According to K, he's kept it on him since he opened the box:


"I think D’s smile says it all. Thank you for the amazing gift, he had tears of joy and love in his heart when he opened the package, thank you for loving him and blessing him with this beautiful quilt. Thanks for your love and support!" –K

My friend's time here on this earth is uncertain, as is each of ours. But D's seems to closer to an end than any of us would like.

It goes without saying that my heart was close to D and his family with each stitch that I stitched. Many many prayers were thought, uttered, and cried during the process. And now, my tiny little gift of love is giving my friend long-distance hugs and warmth as he loves on his family and continues on this journey.

In addition to D's battle with cancer, J, the husband of another college friend, K#2, has recently gotten some not-so-positive news regarding his own battle with cancer. I would ask that you pray for peace and comfort for both families. And for the last treatment option for J to be one that works to heal his body. And for the family and friends who surround these friends in Texas to step in and help them in real and tangible ways as I am unable to from here. Both of these amazingly strong and supportive women of faith have been fighting for their men during the course of their journeys. I am so thankful for each of these women!

So you see, these quilts we make, we make with love, and prayers, and a hope that they warm the lives of those we make them for. Even the "everyday" custom quilts that we make for our customers we don't know well. There is a "connection" we make with the recipient throughout the quiltmaking process, a connection that the recipient may never know is there. And that's ok.

Thank you for taking time to read the story about this quilt.

Off to make another quilt, and remind my own husband how thankful I am for him, and for the health the Lord restored in him!

It's Officially Spring,Y'all! After what seemed to be a never-ending winter, it's finally spring in beautiful Historic Downt...

Yadkin Valley Quilts
Yadkin Valley Quilts is a working and teaching quilt studio and so much more! We offer classes for beginner to advanced quilters, as well as quilt kits, blocks of the month, quilt alongs, open sew times, and more. Located in beautiful Historic Elkin, our studio also features handcrafted items from local and regional artisans. We also offer Custom Quilts, Memory & T-Shirt Quilts, Longarm Quilting, and Embroidery services. Stop in and satisfy All Your Quilty Pleasures!